We lost our precious son lil’ Gary on March 15, 2002, he was 24 years old. After several years of turmoil, he took his own life. He was heart-broken over a girl and overwhelmed by problems life had thrown his way. He had just been diagnosed with bipolar disorder, which was devastating to him. We believe years of self-medicating and drug addiction influenced his decision.

The only comfort we have is in knowing that before Gary died, he made peace with God, and left us to go be with Him. He did not leave us a note but left us the gift of knowing without a doubt that he is in heaven waiting for us.

Gary wrote a letter to his girlfriend about a month before he died. He wrote about his faith and explained to her how she could be saved. He wrote:

I have decided to give my life to Jesus. I was at ground 0 I got on my knees and begged God for forgiveness and to help me-He will to because that’s all he wants is for you to ask him for forgiveness and ask Jesus to come into your heart. He died for you. If you were the only one on earth He would have still died to prevent you from going to hell.

…as much as I talk and tell you about God, it’s never gonna do any good. You have to want to change sincerely in your heart all can be forgiven that’s why God gave His only son to die for you-we are born into sin and He knew that you would need Him-all you have to do is swallow your pride, admit that you are a sinner against God-ask for forgiveness, ask Jesus to come into your heart with sincerity and start to live a new life through Christ. It’s not an overnight thing though-all your problems aren’t going to just go out the window, but the devil has no power over you when your God’s child.

Just think you don’t know if you’re gonna see tomorrow, are you willing to take the gamble of life…

This was not the whole letter, but excerpts showing Gary’s heart. He called me from jail a few weeks before he died and told me he had been studying the bible and found a Psalm. It was Psalm 143. He said, “mom that’s my Psalm.” He also told me that the chaplains had been coming and encouraging him with the word. He said, “mom they’re awesome.”

Gary had come to Utah to live with us several times in the last few years of his life. In 2001 he was with us for about six months. We are so thankful for that time we had with him. God had impressed on us that Gary needed our love and acceptance. Even though we did not agree with his lifestyle, he needed to know we loved him unconditionally. We did everything we could to show him that. I am so thankful we did not listen to some of the advice we got about tough love. It’s just not what God wanted us to do and now I see why. If we had turned our backs on him, I don’t know what we would do now. When he left to go back to California, he left a thank you card. In it, he wrote:

Mom,
I appreciate all your effort to try and get me on track. I know it’s been “grueling” but hopefully things will work out and I’ll be able to take care of everyone who took care of me. I love you all and think it was good that I came to stay with you, so we could better our relationships. I’ll miss ya. Wish me the best with my crazy career choice. I think it was meant to be.
Love lil’ Gary

God never wastes a hurt. Our hope is to help others by sharing our story, keeping Gary’s memory alive through Good Works in his loving memory.

Our Story for His Glory 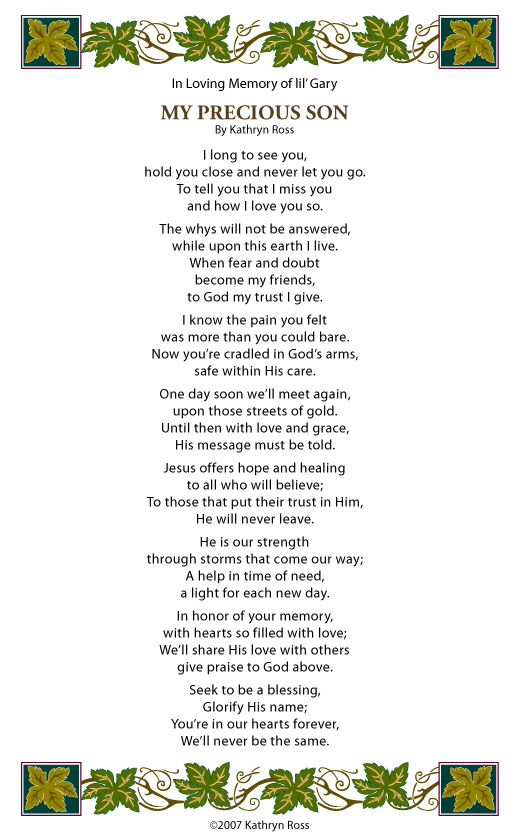 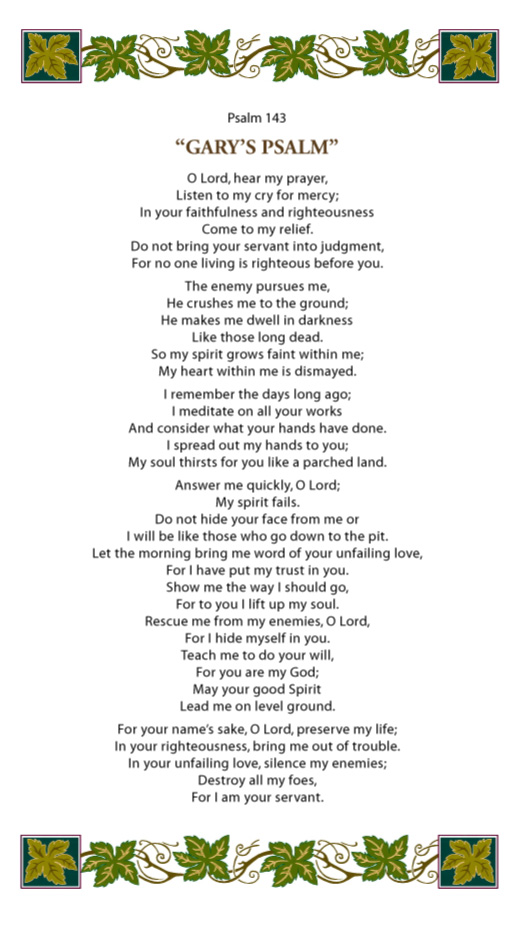 Sign up to receive our newsletter at the left of this page. For previous newsletters, select from the list below:
Fall 2021
Winter 2022 Spring 2022